On this episode of the 'A Day With' series we met Fredrik Karlsson, the up-and-coming interior designer and vintage furniture collector, to talk about his passion for design, art and watches.

Editor: Sebastian Frank
Photographer: Oscar Glamsjö
For those who don’t know, Fredrik started his career, as many others do these days, on Instagram. Social media has been a useful tool for him to start working with his passion: to helping people and businesses with interior design. His interest in design started when he was about 20 years of age. Back then, it was all about Danish design pieces, Fredrik explains.

“When I started collecting furniture, about ten years ago, I was all into Danish design, and especially pieces from Paul Kjærholm. I still have a lot of love for the PK-31 armchairs, that were my first real vintage pieces, but I ended up trading some of my Kjærholm furnitures for the “Utö” table by Axel Einar Hjort. I wanted my home to feel warmer, and this wooden table from 1932 is certainly adding some warmth and is itself a strong character."

Fredrik’s Instagram-account has increased in popularity the last couple of years. He has, at the time of writing this, 70.000 plus design-interested followers, mostly located in New York and Paris, that appropriately enough are two of his favorite cities to gather inspiration from, Fredrik continues.

“About three years ago, when I obtained the “Utö” table, I really started to get interested in historically important wooden furniture. I quickly found out about the well-known architect Le Corbusier and later on his cousin, Pierre Jeanneret. They were both born in Switzerland, but they have made so much for the French design history so many people consider them as French designers these days.”

His Instagram-account has also helped him get in touch with clients. Last year, he helped Mr. Virgil Abloh and Off-White with the decoration of their flagship store in Milan, and recently he worked with brands like Fritz Hansen and Hästens.

“It is really a dream come true working with such well-known brands. I couldn’t imagine this when I first started and it is a true pleasure to be able to work with your passion”, Fredrik says.

When we ask Fredrik about his favorite piece in his collection, he tells us that he loves all his pieces almost equally, but one thing that has a special place in his heart is the original, Indian made Pierre Jeanneret desk from 1957.

“When I was on the hunt for a new apartment after selling my old one back in 2017, I really wanted the new one to fit this Pierre Jeanneret desk that I recently discovered. To be honest, I bought an apartment that could fit something that I didn’t really own at that time. However, as soon as I moved in, I was lucky enough to find this sought-after desk that was in great condition, and that was suited perfectly for my new apartment.”

As many of his followers know, Fredrik isn’t just passionate about vintage furniture and art. He is also a big fan of watches, and he has a few unique pieces in his collection. He’s favorite watch is his Rolex Daytona 6263 from 1975, also commonly known as “Big Red”. He also shows us his Tudor “Snowflake” from 1968 with “Ghost bezel”, and a Rolex Submariner 1680 with a rare “Tiffany Dial”. This may mean nothing to a watch novice, but for those who know how rare these watches are, it is probably a massive jaw-dropper. Fredrik continues explaining his love for rarity, patina and history.

“I have always liked rare things that doesn't say very much when you first take a look at it. Things you need to look a little bit closer at to really understand. I’m probably more into watches than I am into anything else, even though I love furniture and art as well. For me it's all about the aesthetics and history behind each piece, no matter if it’s a watch, a painting, furniture, or something else. Even the Levis denim jacket I am wearing has a history behind it.”

Fredrik continues explaining the next step in his collecting. The hunt for something, Fredrik says, is the most exciting part, and now he is searching for new things to add to his collection.

“I am lucky enough to own some original pieces by Pierre Jeanneret, Charlotte Perriand and Jean Prouvé in my collection and they are all beautiful and mean a lot to me. Two things I'd love to add into my collection would be a original 1950s “Standard Chair” by Jean Prouvé and, how crazy it might sound, the “Cube” by Le Corbusier, which basically is a wooden box with handles on each sides that was made for students to sit on back in the days. It is something about the simplicity and history behind that box that really gets me. I will probably have to look my entire life for that box, but collecting never stops. It is a lifetime quest.”

A Day With: Anders Holmberg

A Day With: Simon Kidston 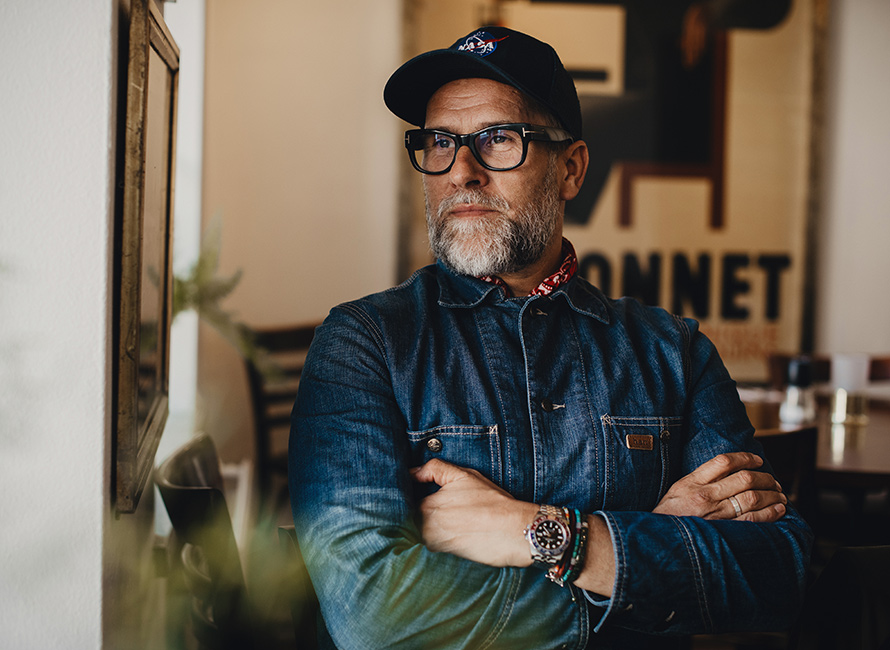 Welcome!
We only deliver to addresses within following countries.
You may continue browse on this .x but we are not able to deliver any goods outside this country.

Germany
Save my choice
Continue to Norway »